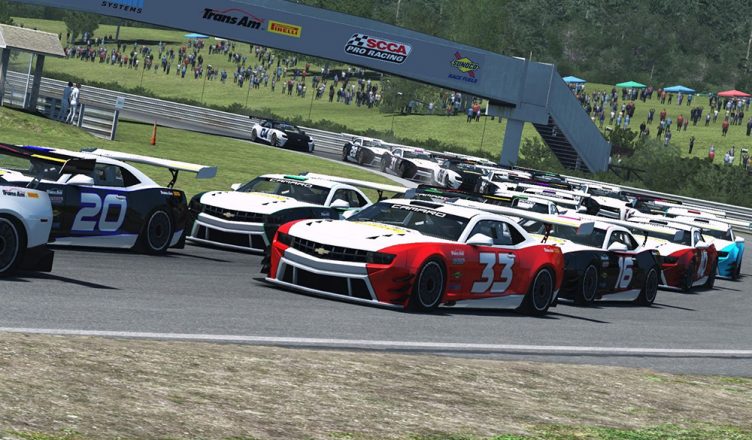 Trans Am Series presented by Pirelli added a new chapter to its 54-year history on Saturday as America’s road racing series took to Lime Rock Park for its inaugural Esports competition with a double-header race on Saturday.

While the races were virtual, Trans Am still delivered the intense racing action its known for.

Twenty-six current, former, and future Trans Am drivers made the most of the virtual opportunity to bump, drift, and run around the 1.5-mile Lime Rock Park, which featured identically trimmed 2012 Camaro GT3 chassis during a swift 10-minute qualifying followed by two 20-minute race sessions.

But after last-lap battles in both races, two-time TA2 champion Cameron Lawrence, in the No. 4 3- Dimensional Services Group, added “Trans Am eRace winner” to his long list of accolades, claiming both checkered flags in the Trans Am by Pirelli Showdown.

“It was kind of crazy in the first race,” explained Lawrence. “I drove off track and handed the lead to somebody else. I was surprised when they said I won.

“On the second race, the biggest thing was working traffic and not making any contact. I saw a lot of dirt and people all over the place, and I was trying to keep it on the track. It was great going for the win on the last lap, I didn’t want to finish second.”

Lawrence took the lead and the checkered. Kicera settled for second with Miller in third. Eagleton finished just outside of podium-position in fourth and Archer completed the top five.

As Trans Am and track management are still monitoring the impact of COVID-19 in Connecticut, the series is scheduled to return to real-life racing May 22-25 for the Lime Rock Festival. Future simulation races will be announced at a later date.