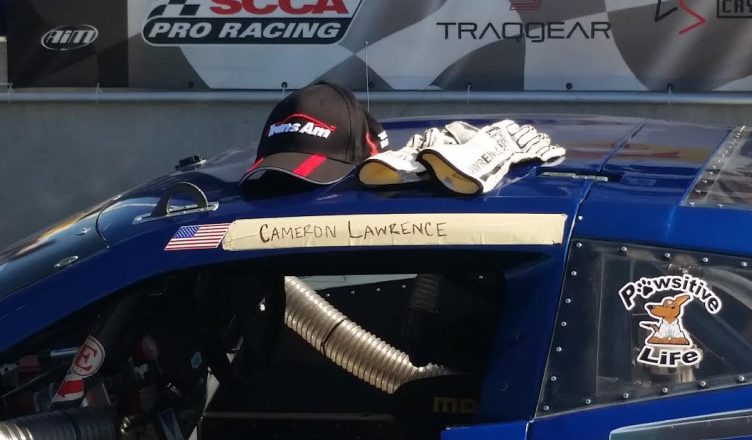 The driver whose name had to be written in by hand with a sharpie on duct tape won the Ryan Companies Independence Day Classic Trans Am series race presented by Pirelli at Brainerd (MN) International Raceway.  Twenty-four year old Cameron Lawrence from Dania (FL) won his first career TA series race in just his second career start.

The number 6 car is not the usual ride for Cameron Lawrence, Mickey Wright has driven that car for Shakopee (MN) based Derhaag Motorsports for the last few years, but Lawrence was in that seat for the Indianapolis race and now the win at BIR.  Lawrence had to start the 100 mile, forty lap event at the back of the pack in 8th on the grid because a busy racing schedule elsewhere prevented him from qualifying this car on Saturday.

The crew members of the #6 car cheered as Cameron Lawrence crossed the finish line at BIR in first.  The 40 lap race saw the lead swapped numerous times as pole sitter #41 Vinnie Allegretta and current point leader #98 Ernie Francis Jr battled for the top spot.  Allegretta finished as the runner-up and was all smiles after the race “It was hard trying to hold off Ernie, the kid is fast and he always has a good car for the long haul and our car got a little loose,” said Allegretta “I had an absolute blast out there Ernie and Cameron are true sportsmen and great racers, it’s an honor to be running with these guys.”

It looked like #98 Ernie Francis Jr was going to win the race at BIR, he had a nice lead until a shocking moment happened with just three laps remaining.  “When I came around turn 12 and when I got off the throttle to get on the brakes the throttle just stuck to the floor, it was something random, don’t know what happened yet” said Francis “we had a good race going, we had a fast car, we will get it at the next one.”

Even though it was the first career TA victory for Cameron Lawrence he is no stranger to winning, he is a two time TA2 Champion and has won 20 races in his ever growing Trans Am career.  Lawrence was subdued in Victory Lane and mentioned thoughts about a fellow racer and friend who died at the track during a regional SCCA race held at BIR just a few hours earlier, the start of the Trans Am race was delayed by more than an hour because of that accident.  Victory lane had more hugs than high-fives and the mood was somber and reflective.

Speed Talk on 1360 had an exclusive interview with Cameron Lawrence, he mentions the recent death of fellow racer Mel Shaw who died at Brainerd International Raceway earlier that day while racing in an SCCA race.  https://soundcloud.com/speedtalkon1360/cameron-lawrence-wins-ta-at